A huge poster of Sabrina Howelcomed guests to her wonderfully crazy birthday party at the Café Royal on Monday 12th September, hot on the heels of Saturday night’s revels at Queen Charlotte’s Ball, where she had been escorted by Archduke Alexander of Austria. The party ran on high octane from the very first moment when a whole tray of champagne flew high in the air to a rousing cheer. Pink champagne was served throughout. Some of Sabrina’s male friends missed the whiskey but said the hot girls were more than enough. They included more than 40 of Sabrina’s British boarding school classmates who studied with her at Queen Margaret’s - and danced on the table tops with her after the cake arrived. And what a cake! Sabrina had to climb it - at least a metre tall, in pink and white with gold roses - to blow out the golden candles. The Oscar Wilde room was packed with her friends and their friends until the end - 150 were invited and 230 showed up.

Special guests included Ella Mountbatten: she and her sister Alexandra became close to Sabrina and her own sister Alice when they came out as debutantes. Spencer Matthews was arm in arm with Sabrina snapping selfies. Sir Henry and Lady Keswick came as old friends of Sabrina’s family. More than a hundred years’ ago the Keswick’s were brilliant entrepreneurs taking China by storm: now it’s the turn of the Ho family in Europe. Others coming to celebrate with Sabrina were Lord and Lady Reay, Baroness Denise Kingsmill, Sir Benjamin Slade, Ms Wendy Yu, and Mr and Mrs Dimitri Chandris. This was a party for all generations: Sabrina closed the dancing in a final waltz with Hon Benedict Kingsmill. Sabrina had insisted on no birthday gifts but could not resist Heineken magnate Michel de Carvalho’s offer of his personal iPhone case as they dined at the after party with Ms Aida Aliyeva and the Keswick’s.

Music was created by DJ and composer The Real Tuesday Weld (aka Stephen Coates) who also MC’d the evening. It’s been said that if philosopher Alain de Botton were ever to join a band, Stephen’s would be the one. The birthday song was played by pianist Brigitte Subkov from the Royal College of Music: Sabrina insisted on the English version only, as a celebration of not just her birthday, but her love of London, her life here and her many close friendships in the West. But the congratulations came from all across the world. Top Chinese actress Angela Baby and Paris Hilton sent special videos wishing Sabrina every success and happiness. 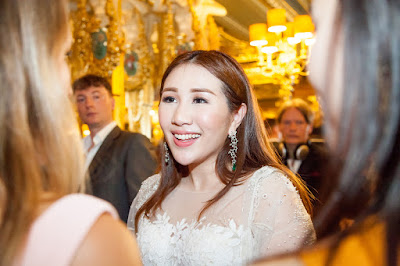